History of the Pit Bull

The breed was originally bred from Old English Bulldogs and Terriers to create a crossbreed to produce a dog that combined the strength of a bulldog with the gameness and agility of the terrier. In the UK these dogs were used in a blood sports known as “bull baiting” ( tying a bull to an iron stake then placing bets on how long it will take for the dog to immobilize the bull ) and “bear baiting” ( this is where they worry or torment (baiting) the bears by putting them with the dogs)

Bloodsports were outlawed in 1835 in the UK so “rat baiting” ( capturing rats and placing them with the dogs and placing bets on how long it would take for the dog to kill them by shaking them to death) and dogfighting became the new sport of popularity. 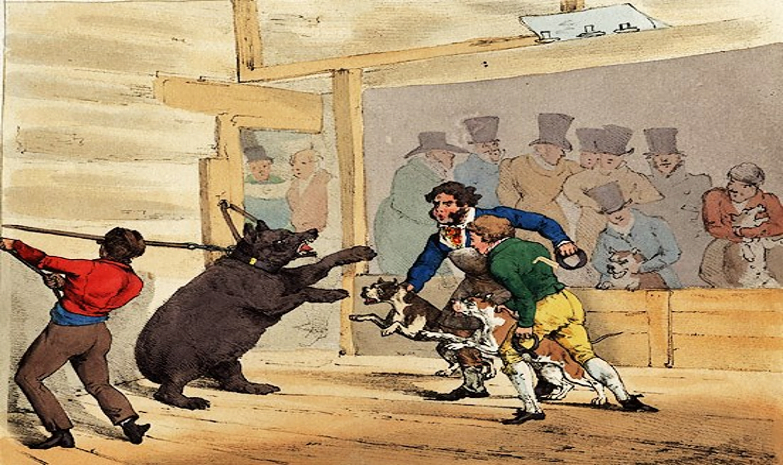 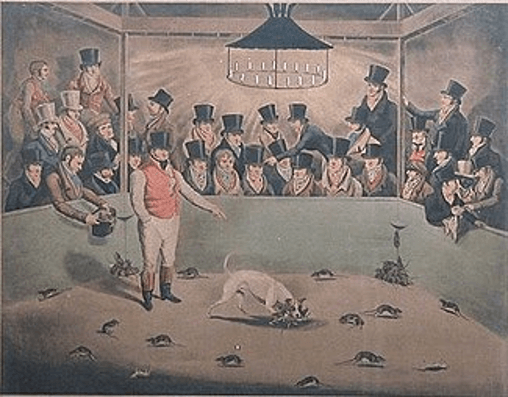 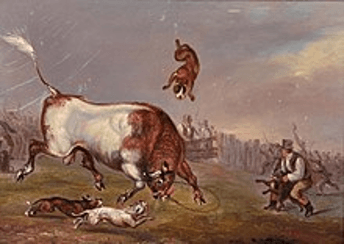 In the early stages of America, many immigrants brought their treasured Pit Bull dogs over as part of their families. Though the dogs were bred for fighting sports, they were also incredibly intelligent and friendly. They were used for a variety of jobs that include farming, protecting the families, watching children and providing companionship. As the years went on the more popular the dogs became, and the more attention grew for the number of exemplary deeds they performed.

As time went on the Pit Bull became more known for “nanny dogs”. 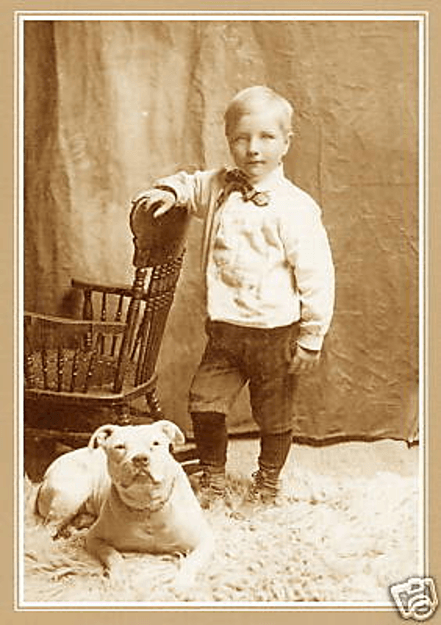 They would watch children while the families
were out working in the fields or otherwise not present. Many people have
reported on this phenomenon, while others tried to dispel it as a myth.

There are plenty of vintage photos that show Pit Bulls with children that would prove they were popular family pets and
trusted with their kids.

One thing is documented, however, is that there is a
lot of notable figures throughout history that were avid Pit Bull owners and
supporters. Some of the more famous include Theodore Roosevelt, Helen Keller,
Thomas Edison, and Humphrey Bogart just to name a few. 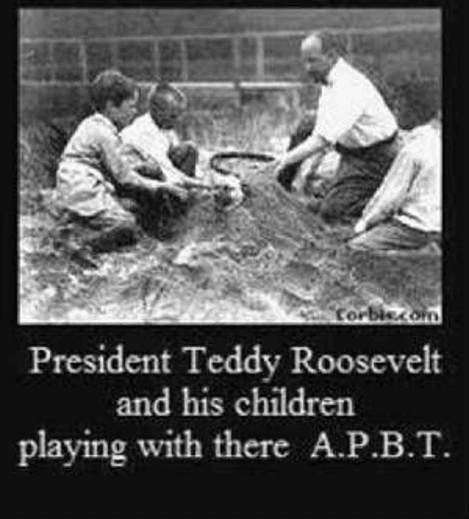 There are also several famous Pit Bulls in history throughout the 20th century labeled as American Heroes. One of the earliest of these was “Bud”, a dog that accompanied his owner Haration Nelson Jackson on the first cross country trip in 1903. 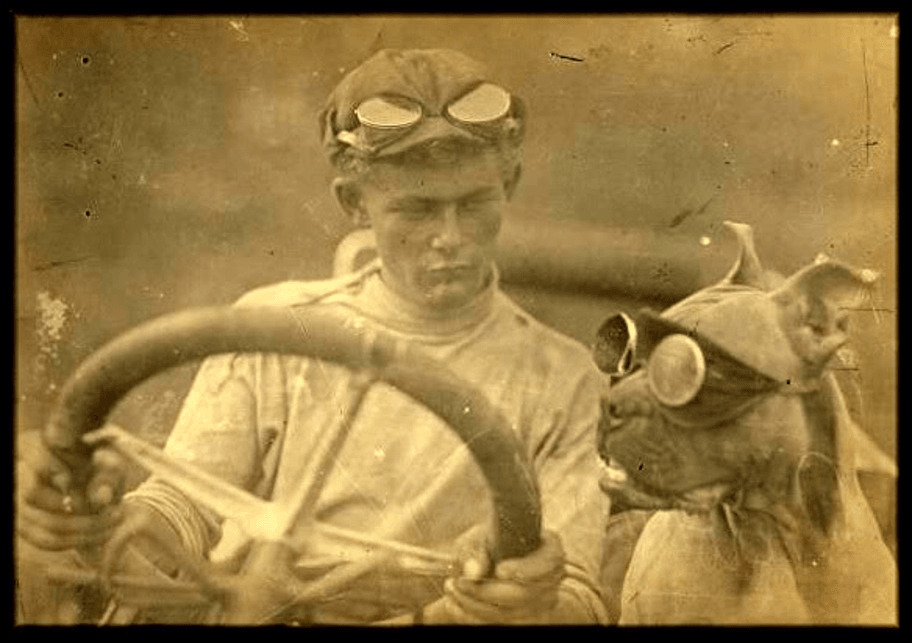 During WW1 and WW2, Pit Bulls were used in advertising as a national mascot. They were so loved in America that they made them their sign of fearlessness and protection in many advertisements.

Sergeant Stubby is one of the most well-known war dogs during WW1. He was found with a stubbed tail near an Army training camp at Yale. Stubby was taken in and trained to respond to bugle calls, march with troops, and salute fellow soldiers. His owner smuggled him overseas to fight in WW1, were he served 18 months on the frontlines in 17 battles and 4 different campaigns.

There are countless stories about his heroism, but Stubby was known for being able to distinguish between American soldiers and their enemies when getting his comrades help. He carried messages under fire and detected incoming attacks of mustard gas then alerted the soldiers. He even sniffed out a German spy by biting him on the butt and then held him down until American soldiers arrived.

In the early 20th century, Pit Bulls were used as catch dogs in America for semi-wild cattle and hogs, to hunt hogs and drive livestock, and as family companions. But the dog fighting remains the main use of the breed until 1976 when it was outlawed in all states.

Pit Bulls Terriers successfully filled the role of companion dogs, police dogs, and therapy dogs. They also constitute the majority of dogs used for illegal dog fighting in America. In addition, law enforcement organizations reported that these dogs are used for other purposes such as guarding illegal narcotics operations, used against police and as attack dogs.

In an effort to counter the fighting reputation of pit bull type dogs, in 1996 the San Francisco Society for the Prevention of Cruelty to Animals renamed the pit bull terriers to, “St. Francis Terriers”, hoping that people would be more likely to adopt them. It failed when 60 temperament-screened dogs were adopted, and they found that they killed cats. The New York City Center for Animal Care and Control tried a similar approach in 2004, relabeling their Pit Bulls as, “New Yorkies”, but dropped the idea in the face of overwhelming public opposition.

Things are starting to look up for the breed. Just recently Arizona became the 20th state to band BSL, (Breed Specific Legislation). America is on the right track.

Many Pit Bulls are still heroes to this present day, with more being trained to be service animals and even police dogs. Search and Rescue Pitties were even involved in missions for 9/11 at the World Trade Center and Pentagon, the 2003 shuttle disaster for NASA, and many high-profile cases. 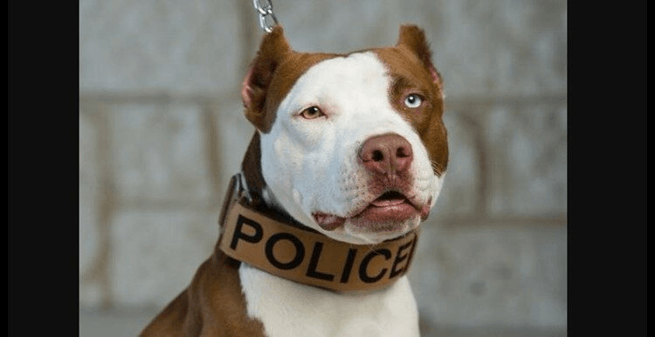 A final note: please do your research before you judge these wonderful, family oriented, charming, intelligent, and goofy dogs. 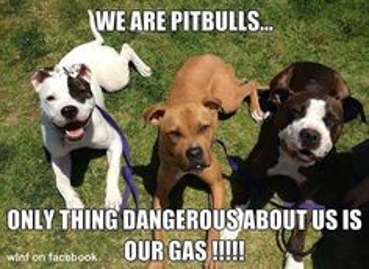